The Louis Group Executive Chairman, Mr. Costakis Loizou, was awarded with an honorary distinction by the Holy Metropolis of Piraeus. Mr. Loizou was awarded with the highest honor, the gold medal of the patron saint of Piraeus, Agios Spyridon. 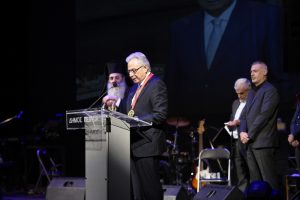 Τhe Executive Chairman of Louis Group was honored for his significant contribution to the charity work carried out by the Holy Metropolis of Piraeus during a charity concert organized against poverty that took place at the Municipal Theater of Piraeus, on the 4th of December. Three other eminent personalities who are supporting the multidimensional charity work of the Holy Metropolis of Piraeus, were awarded with the highest honor.

In his speech, the Metropolitan of Piraeus, Seraphim, thanked “the four supporters and companions in this great charity work of the Holy Metropolis of Piraeus”.

Expressing his joy for his presence at the event, Mr. Loizou congratulated the charity work of the Metropolis. “I feel particularly excited to receive this honorary award from the Metropolis of Piraeus and especially from His Eminence Seraphim, a very important guardian of spiritual and moral conscience. For us it is a great joy and honour that God has pleaded us to be able to offer a small stumbling block to this enormous effort. The concept of giving works in two ways. On one hand, it is the person who is the recipient and on the other, the one who offers it. And the one who offers is always much more rewarded, whether he is a simple person or is a big organization or company,” Mr. Loizou said.

This important distinction proves once more that the Louis Group does not only offer the best hospitality and travel experience, but it also supports the local society it operates in and especially the vulnerable groups of the population.